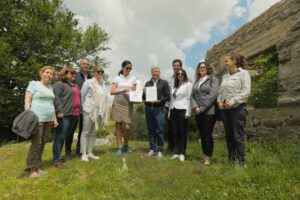 On 17th July at the Info-center on Ponikva we organized an event which was part of the European Green Belt initiative in order to award the Municipality of Kochani. This Municipality was awarded with the prestigious status of Green Belt Model Municipality among all municipalities in the Balkan Green Belt. The award was well deserved as this Municipality was exceptionally dedicated to nature and biodiversity conservation by supporting the establishment of a new protected area on the Osogovo Mountains.

The award was handed to Mayor Nikolcho Ilijev by the German Ambassador, HE Anike Holstein. Upon receiving the award Mayor Ilijev briefly mentioned nature conservation actions taken by the Municipality as part of the protected area proclamation process. “The process of establishing a protected area in the Osogovo Mountains and the scientific research related to it enabled us to acknowledge and fully appreciate just how many natural values and rarities our region holds.” The mayor listed some of the next steps the municipality plans in support of rural and bicycle tourism – the construction of a mountain hut and an educational center, to name a couple. Mr. Ilijev stated that “future management and developed of the protected area depends on everyone and on the public awareness for sustainable use of resources.”

The Chairman of the European Green Belt and the Director of the German Foundation EuroNatur, Mr. Gabriel Schwaderer, explained the importance of the Municipality of Kochani “It is exceptionallty rich in nature as well as in good people that is why it is a model municipality for nature conservation, sustainable development and cross-border cooperation. Osogovo Mountain, as part of the European Green Belt is a home to outstanding landscapes and harmony between people and nature.” Schwaderer also added that all municipalities that work on the implementation of this initiative have an important role in European integration. 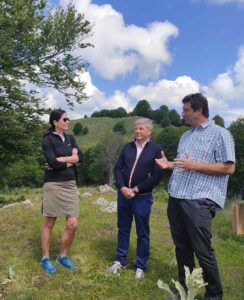 The European Green Belt stretches along the former “iron curtain” between the east and the west and covers areas that were well preserved because of minimal or complete lack of human activities. This border that once divided countries now symbolizes global efforts for joint cross-border activities for nature conservation and sustainable development. The initiative has the goal to align human actives and nature and increase opportunities for socio-economic development of local communities. In all 24 countries we nominate one municipality that has contributed the most to nature conservation.

We organized this event together with EuroNatur and it was attended by the German Embassy in Skopje, the Ministry of Environment and Physical Planning, PE National Forests, Farmahem and the Center for East Planning Region. 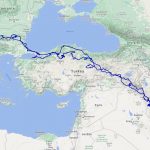 Sunchica returns after spending the winter in the Middle EastBalkan Detox, News