We are excited to inform you all that the far-travelling Sunchica is back in the Balkans after flying around the Middle East for the past 5 months! 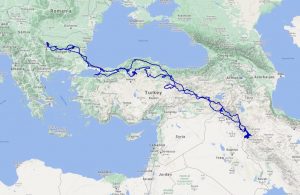 Back in 2019 the Fund for Wild Fauna and Flora (FWFF) tagged Sunchica as well as several other Griffon Vultures, with GPS tags in Greece and North Macedonia. The Macedonian Ecological Society was part of this effort in tagging with hopes to track poisoning incidents in the Balkans which continues to bring vulture population counts to devastating lows. Sunchica’s travels have been exciting to monitor with the vulture embarking on an impressive trip which brought her all the way to the Middle East. Although she’s had a successful journey, things weren’t always optimistic for the young vulture.

In the beginning of October 2019, Sunchica was found in Berovo hungry, exhausted, and unable to fly. Animal protection association Pro-Anima Berovo called us to help with the vultures’ rescue. Sunchica was then taken to the Skopje Zoo where she was looked after and rehabilitated. By the end of October, the vulture was released by us in Vitachevo from where she began to fly east. Unfortunately, by mid-November she was detected to be in trouble and was captured near Lake Vistonida in Greece. Once again, she was found in an exhausted s 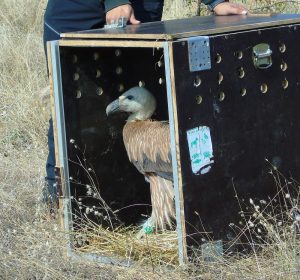 Sunchica, seconds before being released

tate due to her inability to find food. After being transported to a vet center in Thessaloniki, she made a recovery and was released again at Dadia in December 2019! Up until October 2020 she had been circling around the Eastern Rhodopes and Central Balkan. Sunchica then began to fly east towards the Black Sea and following the coast. Crossing Turkey and Iraq, she reached Iran by late November. Now, after 6 months, Sunchica has returned to the Balkans and can be seen flying through the skies of western Bulgaria!

Since October 2020 Sunchica has been recorded to have flown 18,732 km! Her starting position and the area where she spent most of winter-time extends to a distance of 2,800 km. This trip is even more impressive considering that it is the young vulture’s first long-distance journey!

This tracking is made possible thanks to the ongoing monitoring of tagged vultures within the new EU-funded BalkanDetox LIFE project  which we are a part of. The project aims to raise awareness and strengthen national capacities in an e

ffort to fight the problem of illegal wildlife poisoning in the Balkans, which is responsible for the population declines of numerous threatened and endangered species. The project also has a new logo which attempts to illustrate the severity of illegal wildlife poisoning using the poisoned skull while providing hope since the poison is draining — therefore, signifying our goal to detox the Balkans from this severe threat. 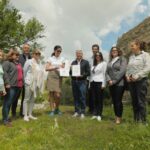