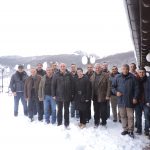 The aim of this meeting was to present the work of MES regarding Balkan lynx conservation and the initial results from the monitoring of chamois in the Mavrovo National Park, conducted in cooperation with park employees.

Participants exchanged views about future transboundary cooperation between the two national parks, whereas also addressed were common problems pertaining to the decreasing number of livestock, transboundary utilisation of given resources, namely, game, pastures and blueberry, as specific challenges faced in both parks.

The meeting was organised as part of the activities of the Balkan Lynx Conservation Action
Plan in Mavrovo National Park, implemented by MES in partnership with Mavrovo National
Park. 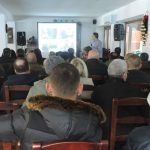