During regular fieldwork activities in the scope of the “One Flew Over the Storks Nest” project we encountered two interesting bird sightings in the Lower Vardar river IBA.

The first surprise was the White Storks pair in the village Bogorodica. According to the locals the pair was first noted in January and has stayed in the village ever since. We suspect that the pair didn’t migrate and has survived feeding in the adjacent wetlands and dumpsites, or stayed in the warmer parts of Greece. Such phenomena of non-migrating Storks are noticed since the 1980s. The most frequent such cases in the last decade occur in Spain and Portugal. The scientists consider attribute this behavioral change as a combined result of the climate change and the easily accessible food source found in both legal and illegal dumpsites. If we confirm that the pair was overwintering, it will be the first such documented case for the country. 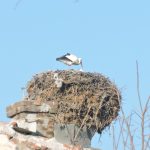 The second surprise finding occurred in the adjacent village of Stojakovo. In a big flock of Magpies gathering around their roost, we noticed a partially leucistic Magpie individual. Instead of the trademark black-iridescent and white feathers pattern, it had dominantly white feathers on the flanks, the belly and the coverts and light brown feathers on its head and the vent. Such genetic changes in the expression of the melatonin (black pigment present in all animals) are rare occurrences, but not strange. More often than not, this type of different pigmentation in animals causes more negative than positive advantages (they can easily be spotted by predators; there are difficulties in thermoregulation and reduced probability to find a suitable nesting partner etc.). MES has knowledge of occurrences of several albino birds, but this is the first documented leucistic bird in the country. We hope this particular Magpie has a successful breeding season and continues to be part of this flock. 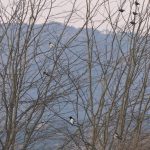 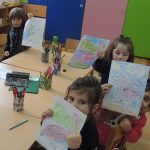 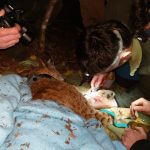