The Macedonian Ecological Society in cooperation with PlantLife, an NGO from Great Britain, and the International Union for Conservation of Nature (IUCN) continued implementing the project named “Connecting People with Nature – Strengthening and Networking of Civil Society in Macedonia” by involving Macedonian citizens as volunteers in nature conservation and undertaking activities instrumental to the implementation of EU regulations relevant for the introduction of the Natura 2000 network. 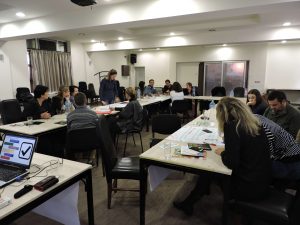 The project is an ambitious initiative to protect wild plants in the countries of Southeastern Europe, with focus on the Mediterranean. Through Plantlife and IUCN combined experience, a total of eleven organisations from eleven countries from the abovementioned region are making efforts to transfer knowledge and experience at national level as regards important plant species and their habitats.

During the project, all partners will undertake activities to protect plants within twenty Important Plant Areas (IPAs) in six countries (Morocco, Algeria, Lebanon, Montenegro, Turkey and Macedonia) by including a large number of citizens, associations, research institutions and other stakeholders.

The project in Macedonia will be implemented in the duration of eighteen months with activities covering the following areas: Dojran, Bogdanci, Prespa, and Ilinska Mountain.

In that respect, Skopje on 25-26 November hosted an introductory workshop attended by representatives from organisations, institutuions and volunteers, from the selected IPAs. “Art Point – Gumno” from Sloeshtica (IPA of Ilinska Mountain), “Action Plus” from Resen (IPA of Prespa Lake), “Polimat 13” from Bogdanci (IPA of Bogdanci), “Renatura” from Dojran (IPA of Dojran Lake) are the organisations taking part in this project. Moreover, complete support was provided by several institutions, such as primary and high schools from from Demir Hisar (Brakja Miladinovci Primary School and Krste P. Misirkov High School), the Municipality of Resen, and by volunteers from the selected areas.

In the following thirteen months these organisations and institutions will be involved in activities towards popularisation and affirmation of their respective IPAs. Also, monitoring activities of given plant species important both at national and international level will be conducted.