On 23 May 2013, the Mayor of Cheshinovo-Obleshevo, Macedonia, received the title of European Stork Village 2013 on behalf of the village from Mr. Gabriel Schwaderer, Executive Director of EuroNatur. The ceremony was held in the Strasho Pindjur Primary School in Cheshinovo in the presence of municipality representatives, the locals, MES members and the press. Children from the nearby schools enriched the ceremony with drawings and songs inspired by the storks they meet every day. This recognition is the first step towards implementation of the programme to conserve and protect the local stork population.

The Municipality of Cheshinovo-Obleshevo has one of the largest stork population, with 70 nests found on the rooftops and polls in the neighbouring villages. The strong relationship between the local people and these wonderful birds is the reason why the municipality was awarded the recognition. In addition, the largest stork nest in Macedonia can be found in the village of Cheshinovo.

The nearby rice paddy fields provide an excellent feeding opportunity for the storks, resulting in the municipality being densely populated. In addition, the local population cares for the stork’s survival by monitoring the condition of their nests often and helping whenever it is needed. 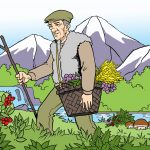