Since September 2018, MES is the official Full Partner to BirdLife International for Macedonia. The official designation ceremony took place in Belgium on the BirdLife’s Global Partnership Meeting. MES’s General Secretary Metodija Velevski PhD. accepted the acknowledgement, as he has been included in the organization’s Partnership processes from the very beginning.

The Partnership to BirdLife International process started in 2006, when MES was designated a BirdLIfe Affiliate in Macedonia. In the next 12 years, MES increased the number of employees working on over ten projects on bird research, conservation and protection, included consecutive educational bird activities for pupils and published the scientific paper on identifying the national Important Bird and biodiversity areas (IBAs).

On this Global Partnership Meeting, two local collaborators of MES were awarded with certificates for their long-term collaboration with MES and continuous bird conservation, protection and promotion efforts on a local level. Ms. Violeta Janeva from Municipality Cheshinovo-Obleshevo and Mr. Emil Lisicanec from NCA Aquila Kavadarci were recognized and appointed as BirdLife’s Nature’s Heroes for Macedonia, joining the hundred such other heroes from around the world. 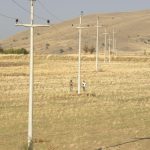